How to Disappear Completely

The Best Brothers and How to Disappear Completely, a pair of one-acts currently on offer at the Belfry Theatre, share a common theme: exploring the impact of a mother’s death on her adult children. But the approach to this theme and the manner in which it is executed provide an illuminating study in contrasts.

For starters, The Best Brothers is a “text-based” play written by an award-winning Canadian playwright and acted by professional actors; How to Disappear Completely was co-created by a team and is performed by a professional lighting designer who insists he is a “performer,” not an actor.

One look at the scripts (which are available from the Belfry box office for perusal in-house) reveals a stark difference: The Best Brothers script tops 100 pages; How to Disappear Completely is only 22 pages long. And yet they clock in at close to the same length when performed. Much of The Best Brothers’ brisk pace is due to short, truncated lines which reveal the conflict between the brothers, Kyle (played by Ron Pederson) and Hamilton (played by John Ullyatt), as they blunder through the post-death rituals of writing an obituary, planning a visitation and burying their mother, while confronting their longstanding sibling rivalry. The dialogue is clever and the delivery by both actors polished, but you probably won’t remember much of it after you leave the theatre. 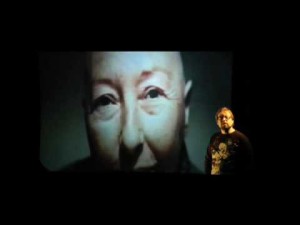 By contrast, in How to Disappear Completely, the script often just points the way forward for the long monologue directed to the audience by Etai Erdal, the solo performer. Erdal meanders from one seemingly disconnected anecdote to another, winning the audience over with his warmth and openness as he confronts mortality and discourses on lighting design in the theatre as metaphor for death. Demonstrating with hand-held controls, Erdal shows the audience how a light called a PARcan has the unique characteristic of growing warmer in tone as it diminishes in intensity. It is at its warmest at one percent, just before the subject being lit disappears completely. When you leave the theatre after this play, you are apt to perceive many things differently, both literally and philosophically, and you may find yourself pondering these new insights late into the night.

Perhaps the greatest difference between the two plays is this: The Best Brothers is a lightweight comedy about fictional characters; How to Disappear Completely is a true story about the death of Erdal’s own mother and his coming to terms with her desire that he help her end her suffering.

At the beginning of The Best Brothers, the  brothers learn that their mother, Bunny, has been killed when a hefty transvestite who calls herself Pina Colada falls off a float at a gay pride parade and squashes little Bunny flat. Hamilton, who is straight and believes, not entirely without cause, that Bunny loved his gay brother better, blames Kyle for her death. Conflict ensues, escalating into physical violence during their eulogy at her funeral. The plot is furthered, but Bunny herself is not well-served, as the brothers alternately don her gloves and hat and deliver extended monologues to the audience in her guise. The introduction of Enzo, Bunny’s nervous Italian greyhound who eats Hamilton’s $250,000 kitchen, provides the one honest moment of feeling in this contrived play. The dog is not physically present, but when Hamilton looks into its cage and asks wistfully: “Why don’t you like me?” you know it’s not really the dog he’s addressing.

At the beginning of How to Disappear Completely, Erdal tells the audience that when his mother, Mery, was diagnosed with terminal lung cancer in 2000 and given just nine months to live, he boarded a plane in Canada and flew back to Israel where he was born and where his mother still lived. By way of introducing himself to the audience, he confesses that he has broken every one of the Ten Commandments, then corrects himself by declaring he has never made a graven image. The implication is clear, and the scene is set for the working out of one of the heaviest moral dilemmas that life can ever impose. Mery is very present during this struggle. Erdal, who at the time was studying to become a documentary film maker, was encouraged by Mery to film her illness and death. When Erdal pushes back a curtain onstage, her image is before us, projected onto a large screen. As she speaks in Jewish, Erdal translates into English for the audience. At various times, Erdal shows footage of his sister and best friend as well, not only translating their remarks, but also copying their movements in an extraordinary shadow play of empathy. The result of this co-created performance was thought-provoking and profoundly moving.

As a text-based playwright whose little experience with co-created productions has been particularly painful, I tend to class co-creations with the making of laws and sausages: to retain respect for them, avoid watching them being made. Measuring these two plays against one another, however, has altered my opinion.

Joy Fisher is a Victoria playwright and theatre lover.